My wife and I just got back from a great two week trip to Borneo.  I'll take you step-by-step through our trip, the booking process, and the number of miles and dollars spent, so you can see what it takes to book your own trip.

Although almost everything was actually booked about a year in advance, our costs are broken out on a day-by-day basis.

In an unfortunate turn of events, my grandmother passed away just a few days before our trip.  Although Chicago was meant to be a quick Saturday night stopover, I called American Airlines and had them bump our first flight to Friday instead.  Even though it was a last-minute change, they waived any change fees ($75?) and let us on a Friday fight for free.  We were able to attend the funeral in Chicago before our big trip.

Originally, our Hong Kong flight departed on Saturday, but AA managed to mess up one of our tickets and we got bumped to Sunday.  This worked out well, though, since we were able to visit a friend.

Finally, we were starting our "real" trip.  The CTA Blue Line took us from Chicago to the airport without incident.  Ground service in Chicago consisted of a Swissair contract lounge with some extra food set out for Cathay Pacific passengers.  Pretty crappy, but it came with an escort to the gate which was a nice touch.  I spent much of the time before our flight exploring the old Terminal 5 including the old Alitalia lounge which was closed and in ruins but unlocked, and a section of unused gates that was filled with sleepy airport employees.

Following a bit of urban exploration (airport style), my wife and I boarded our 777.  Wow, what can I say?  International first class is incredible!  Our suites consisted of a love seat, a guest seat/ottoman, a personal closet, and a nice size TV.  We found out there were three flight attendants working the six seat cabin, and they personally introduced themselves and offered pre-flight drinks.  I ordered their non-alcoholic specialty drink made of mint and kiwi juice -- mmmm!

My wife and I pre-reserved seat 1A and 2A, which are separated from the rest of the first class cabin with a divider.  It was literally like having our own private jet.  The only downside is we sat so far away from each other, we couldn't talk much en-route. 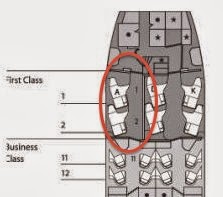 However, at dinner time, they added a table extender and we were able to eat sitting across from each other.  Wow!

Following dinner, the flight attendants made up our very comfy beds, and we changed into our provided Shanhai Tang pajamas.  Classy!

Quite honestly, the beds were incredible -- better than many of our hotel beds.  I could actually stretch out with room to spare, and I'm tall (6'5").

When we landed, it was around 8pm in Hong Kong, one day later.

Upon arrival, customs were fast and easy, and we grabbed some local currency from the ATM.

Although there was a high-speed train from the airport, it didn't go directly to our hotel in Kowloon, and we didn't want to mess around with transfers.  Instead, we took the CityFlyer bus, route A21, toward Nathan Road.  The fare was HK$33 (around $4), far cheaper than the train, and it took us right to the door of our hotel.  Announcements were easy to understand, in English, and broadcasted on a LED panel above the driver.  Nearby hotels were listed, and there was tons of space for luggage.  What a deal!

About an hour later, we arrived at the Intercontinental Hong Kong.  As part of my IHG credit card renewal, they credited my account with a free stay anywhere in the world.  The Intercontinental in Hong Kong is one of IHG's flagship properties, right on the bay, and I was looking forward to our stay.

Upon check-in, we found out we were upgraded to a huge room overlooking the pool (not the bay, unfortuantely), and received a couple of drink vouchers for the evening.  Our room had a giant bed (much larger than a king), lots of art including a sculpture in the bathroom, and a nice selection of fruit including a dragonfruit.  We were even able to check-in inside our room instead of the lobby -- a nice touch.  My wife and I are both IHG platinum due to our credit cards, but typically Intercontinental hotels don't offer a lot of benefits to platinum members because they have their own buy-in loyalty program.  We were pleasantly surprised with the treatment we received, and the room was a great use of our free night.

We woke up the early the next morning to a warm, sunny day.  Having been introduced to Dim Sum back in the states, we were anxious to try the "real thing" in Hong Kong.  We grabbed the Star Ferry across Victoria Bay, which was a cheap, clean, and pleasant way to make the jump.

When we arrived on the opposite shore, we were somewhat amazed to find out that Hong Kong is connected together with a series of above-ground walkways, making walking on the street mostly unnecessary.  The walkways were well-used, clean, and direct, although we couldn't help but think were were running around in a giant habitrail.

Finally, we arrived at our destination, the old and drab but oh-so-delicious Lin Heung Tea House.  The place had all the atmosphere of an interrogation room -- shared dirty tables, clocks on the wall pushing you to eat faster, and bright flourescent lights covering the entire ceiling.  Old women shoved trolleys through the aisles, tossing down selected food and writing down marks on patrons' tally sheets.  If you exhibited any hesitation, the trolly would be gone -- fortunately, the next one was not far behind.

I honestly have no idea what we ate, and I'm pretty sure they just charged us some random amount at the cashier stand -- likely unrelated to our actual orders.  But, it was cheap and good, and quite an experience!


We explored some of the famous escalators, used to pull people up and down the mountains that make up the city center, and eventually made our way back toward the airport on the bus.

My next report will detail our flight to Malaysia.

The International Line
My name is TIL. I'm a miles and points addict. I've figured out how to travel anywhere in the world for free, staying at the world's most exotic hotels and flying the world's top airlines. This blog is all about sharing successes and failures, and helping others travel the world for free.